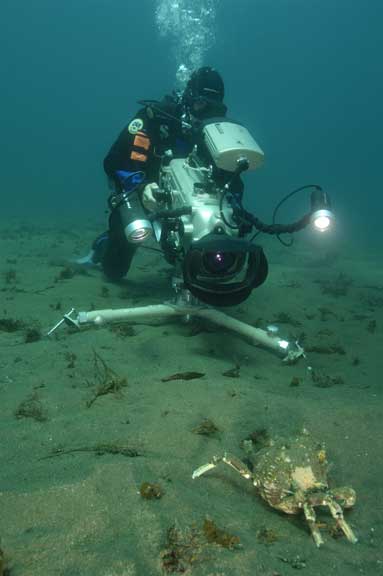 Clay Wiseman has a degree in ichthyology (fisheries biology) and a minor in marine invertebrate zoology from the University of Washington in Seattle. After working in mariculture and then in commercial diving he went to work for the Aggressor Fleet of live-aboard dive boats as ships captain and photography and video pro working contracts in Cayman, Belize, Turks and Caicos, Hawaii, Truk Lagoon and Palau. In 1995 he left the Fleet to pursue a career in professional photography. Since that time he has published his photography and writing in National Geographic Magazine, Time Magazine, International Wildlife Magazine, Ocean Realm Magazine, Skin Diver and Sport Diver Magazine to name just a few. He is a regular features contributor for Sport Diver Magazine. Additionally, he co-authored Guide to Marine Life of the Caribbean, Bahamas and Florida with his friend and colleague Marty Snyderman (Aqua Quest Publishing). Clay also works as a professional videographer. In June of 2003 his documentary production Medicines From the Sea aired on PBS as part of the California Connected series. He is currently working on a documentary for the Homeland (now Mar Isla) Foundation: Leatherback. Recent shoots have included Jet Ski Lifesavers of the L.A. Fire and P.D., as well as a point-of-view recreation of a Tsunami Survivor for National Geographic Television. Clay has filmed extensively underwater with the Sony HDCam/Amphibicam combination and now is using the Red One 4K/Gates Deep Red system. He was the first to use macro lenses underwater with the Red Camera.