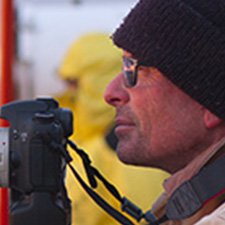 Doug Thost began his involvement in natural history film-making under the guidance of David Parer as sound recordist and assistant cameraman for the Australian Broadcasting Corporation Natural History Unit / National Geographic co-production “Island of the Vampire Birds” shot on the Galapagos Islands and in mainland Ecuador in 1997. He shot, directed, and co-wrote “Ice Shelf” for the ABC NHU, shot on location in Antarctica and Heard Island, in 2003. He is an experienced scientific researcher, with a doctorate in geology and research experience in Australia, Antarctica and the subantarctic. He has travelled to Antarctica 21 times, as a researcher, guide, zodiak driver, and voyage leader. Doug is also a commercial pilot who has developed and built the only gyro-stabilised camera side-mount for helicopter work in Tasmania. A professional photographer, Doug has exhibited in 18 solo and group exhibitions since 1994. His work can be found in private collections worldwide, and has featured on eight Australian Antarctic Territory stamps. Doug’s specialties are timelapse and aerial photography.