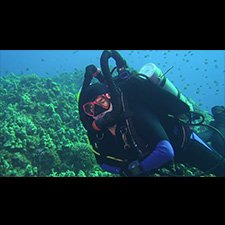 I started diving in 1968 in CANADA, worked as commercial diver, move to the west in 1971 dove the west coast south to California Shooting stills ,found Hawaii in 1975 and returned as much as possible Dove Billize then British Honduras returned to shoot the Caribbean in Standard DEF Video. I move to Hawaii in 2003 dove and shot in standard DEF Traveled to Australia shot the Great Bearier reef ,2009 dove the Mexico Yucatan Cenotes 2010 dove the Bay Island Honduras I have been shooting HD and HD-3D the last three years in the Hawaiian Islands