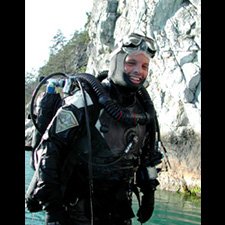 Sealife Productions was started in the early 1990s by Florian Graner. After finishing a B.S. degree in marine biology, Florian extended his hobby of underwater still photography into the field of film.

Now, more than a decade later, Florian holds a Ph.D. in marine biology and works full-time as a freelance marine cinematographer. His photographs have been published in various diving magazines, books and field guides, and his films have been shown in many countries.

Florian undertakes underwater cinematography assignments to all regions of the planet. He has worked on numerous film productions including the BBC's Incredible Journeys: The Whales' Tale; Amazon Abyss; Extreme Animals; and The Blue Planet. Florian filmed and produced the award-winning program In Norway's Coral Gardens for the German television company NDR Naturfilm, which was also shown by National Geographic. In addition to filming other underwater productions for NDR Naturfilm, Florian has had assignments for Parthenon Entertainment/National Geographic, and Norwegian and Danish televison companies. In his spare time Florian keeps busy shooting stock footage, both video and still photographs, for his extensive personal libraries.

In the past Florian used a Panasonic DVC-PRO 50 camera (AJ-D900WE), supported by Sony DVCam Camcorders (DSR-D100E) for underwater assignments where the filming budget did not support the use of a large underwater housing. As of December 2004, Florian upgraded his equipment for high definition (HD) productions. He purchased a Sony HDW-750P camera and upgraded to HD lenses. Early in 2005 he purchased an underwater housing for his HD camera, so Florian is now shooting HD underwater.

Sealife Productions has a strong ethical mission. Florian is committed to using his work to bring issues to the public that would otherwise be difficult to visualize. Florian has produced material for several environmental groups and has appeared on television and radio programs in both the US and in Europe to promote marine conservation issues.

Florian is constantly pushing forward the boundaries, both in terms of diving methods and camera technology, to bring unique images back to the surface. In keeping with this philosophy, we hope this website provides a resource for promoting the conservation of a truly global domain.....the oceans.