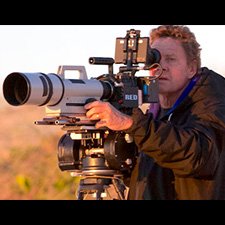 When I was seven years old my dad loaned me his old Box Brownie camera, and then when I was 13 he let me progress to his 8mm movie camera. I was hooked on cinematography immediately.

When I finished high school in 1970, I enrolled in a four-year diploma course in film at the San Francisco Art Institute. I wanted to learn to make my own surfing films, start to finish. I spent my winter vacations in 1971 and 1972 on the North Shore of Oahu with a Beaulieu Super8 camera shooting footage of all the big surf stars of the period, and then road-showed that first Super8 film, Cold Lines and Natural Bridges, in 1973 and bought a 16mm Bolex camera with my profits.

For my graduation assignment in 1975, I raised $12,000 to shoot a nine-month surfing/sailing adventure from California to French Polynesia, featuring a few photogenic friends who could surf well. It won gold medals in amateur film festivals, and a silver at Cannes. My career as an ‘ocean cameraman’ was up and running.

In the mid 1970s renowned film-maker Greg MacGillivray let me shoot parts of the ‘Magic Rolling Board’ and ‘The Shaun Tomson Sequence’ for his hit film Five Summer Stories-Plus Four. Then, out in the desert shooting for an early skateboarding film with skater and board designer Tom Sims, I met some French filmmakers who hired me to shoot and direct a series of Perrier commercials for European cinemas.
From 1976 to 1979 I travelled around the world shooting the surfing film Fantasea which was quite successful but by the time I had road-showed it across America and Australia, I was burned out on film as a career. In 1980 I sold my cameras and moved to northern New Zealand to build a house with hand tools, no power.

After living like a survivalist for a couple of years, I married my first wife Barbara, an Eileen Ford model, and moved to Manhattan to be with her. I spent a few years assisting ‘natural light’ fashion photographers since they got paid twice what I could earn shooting film.

From the mid 1980s until the mid 1990s I shot clothing ads for the fast-growing surfwear companies that were mushrooming in California. I shot ‘swimsuit editions’ for several windsurfing magazines. Eventually I landed a multiple year contract to shoot women’s swimwear for a big catalogue company, requiring me to hang out on Caribbean beaches shooting very tall beautiful women while staying in luxury resorts. Tough job but some one had to do it. By 1999 I had shot over 150 magazine covers for magazines like Outside, Women’s Sports and Fitness and Runners World, as well as hundreds of advertising pages.

Ready for another change, I bought 35mm movie gear and started going to South Africa for three months every year, alternating filming Great White sharks underwater in Gaansbaai and filming surfing dolphins at Jeffrey’s Bay. After six trips between 2000 and 2006, I had accumulated 75 days on the Great White diving boats and shot some unique 35mm slo-mo underwater footage that National Geographic still licenses from me. Some of my dolphin footage was seen in the Academy Award winning documentary The Cove. The rest was used in my own film Surfing Dolphins. My film footage has now appeared in more than 200 TV commercials, documentaries and feature films.

In 2000 I met my wife Andrea who owned a whale and dolphin watching business in South Africa. We moved back to Santa Barbara and lived on Miramar Beach where I grew up. Four years ago I donated all my 35mm film cameras to the Surfing Heritage Foundation and bought the amazing RED Epic camera and started chasing big waves again, filming Cortes Bank and Shark Park in California, Nazare in Spain, Peahi in Hawaii, and Teahupoo, Tahiti.

Four years ago we sold our Santa Barbara beach house and have now moved to Australia. Our kids are now 12 and 13 so we all surf together in the clear warm waters of the Noosa area. I still shoot surfing and am in the water with the RED in a housing several times a week. I am working on a new project titled Morning Of The Earth-The Second Coming with Australian film-maker Albe Falzon.

Forty four years after starting film school, I’m still as keen on filming the ocean as ever. It’s never been about the money for me, it’s about the adventure and following your passion. It’s not really ‘work’ when you love what you do, and lucky me, I still love it.