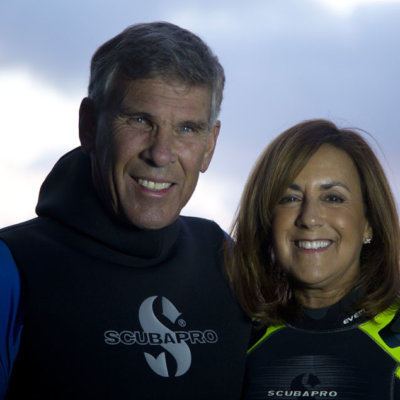 Howard Hall Productions is a natural history film production company specializing in marine wildlife and marine conservation films for television and large format theater. The company is owned and operated by Howard and Michele Hall.Howard Hall's career as an underwater natural history film producer, cinematographer, still photographer and writer began in the early 1970's. He has been a roving editor for International Wildlife Magazine, a senior associate editor for Ocean Realm Magazine, and is on the panel of experts for Fathoms Magazine. His photographs have been published internationally in hundreds of books and magazines including: Life, Natural History Magazine, National Geographic, GEO, Terre Sauvage, London Illustrated News, and BBC Wildlife. Howard has authored several books including Sharks, Dolphins, The Kelp Forest, Successful Underwater Photography, and Secrets of the Ocean Realm.Michele Hall left a nineteen-year nursing career to join the family business in 1991. She is an accomplished still photographer whose images have been published by National Geographic, Fathoms, National Wildlife, Ocean Realm, and many other magazines and books. Michele has also worked as an assignment photographer for National Geographic. Between them, Howard and Michele have won seven Emmy Awards.Howard has worked on over one hundred underwater film projects. He has produced and/or directed many award winning natural history television films including a National Geographic Special, which he co-produced with Michele, and three episodes of the PBS series Nature. Howard also directed and Michele produced the award winning, five-hour series Secrets of the Ocean Realm for PBS.Howard and Michele are perhaps best known for their underwater IMAX films. In 1994 Howard directed the IMAX 3D feature, Into the Deep. In 1998 Michele produced and Howard directed the IMAX feature, Island of the Sharks, which was an enterprise of Howard Hall Productions. Howard was director of underwater cinematography for the Primesco Productions film Lost Worlds, the MacGillivray Freeman film The Living Sea and was underwater cinematographer for MacGillivray Freemans Journey Into Amazing Caves.In 2002 Howard was underwater sequence director and Michele was location manager for MacGillivray Freemans IMAX feature Coral Reef Adventure, a film in which both he and Michele are featured on-camera. The Hall's most recent IMAX feature, Deep Sea 3D, was directed by Howard and produced by Michele. The film was released in April 2006 and won Best Picture at the Giant Screen Theater Association and Best Large Format Film at Wildscreen 2006.Howard holds a BS degree in zoology from San Diego State University. He is a member of the Directors Guild of America and the Academy of Motion Picture Arts and Sciences.Michele is a Registered Nurse and holds a B.S. degree in Health Sciences. She is a member of the Television Academy of Arts and Sciences and the Women Diver Hall of Fame. Both Howard and Michele are on the board of directors of Ocean.com. .