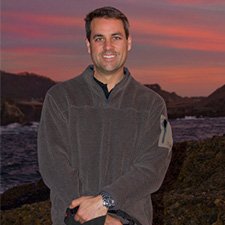 Kip Evans is a professional photographer, underwater explorer, and award-winning cinematographer. His images have been widely published in books, exhibits, advertisements and magazines worldwide, including National Geographic Magazine, Patagonia, Outside, Sea, and Coastal Living, just to name a few. As a cinematographer, Kip has worked on a number of underwater documentaries, including specials for CNN, BBC, Discovery Channel, and National Geographic, including Pearl Harbor  Legacy of Attack with Dr. Robert Ballard, the discoverer of the Titanic. Several of Kips films have debuted at both the San Francisco Ocean and the BLUE Ocean Film Festivals and his most recent documentary, Isla Holbox  Whale Shark Island, was an award winner at the 2010 BLUE Film Festival held in Monterey, California.

Throughout his career, Kip has collaborated with many notable organizations and individuals. For over 10 years, he has worked on several National Geographic Society projects including the Sustainable Seas Expeditions, serving as the chief photographer for noted marine biologist Dr. Sylvia Earle. During this project, Kip traveled in the US, Mexico, American Samoa, and Belize, exploring remote offshore underwater canyons, pinnacles, and reefs, and spending over 300 hours diving submersibles at depths of 1,800 feet. Kip joined the Sylvia Earle Alliance in 2008, as the Director of Photography and Expeditions. Since then he has lead expeditions to Belize, Cuba, and Mexico, documenting hope spots, special areas of the ocean that need critical protection.

In addition to his media experience, Kip has worked as a marine biologist, expedition leader, and an educator for the National Marine Sanctuary Program. As a scuba diver, he has amassed over 1,500 hours underwater  nearly half of those piloting high-tech submersibles, such as the Deep Worker and Deep Rover to their full operating depths of 2,000 and 3,000 feet respectively.

During his free time, Kip enjoys rock climbing, backpacking and cycling. He currently resides in the Monterey Bay area with his wife and two children.