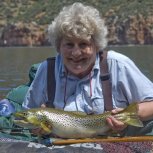 Judy grew up collecting horny toads (horned lizards), crayfish, and June bugs. She has always loved all things wild. She received a BS in wildlife science from Texas A&M University and a MS in biology from Sam Houston State University. She began teaching biology in Johannesburg, South Africa so she could explore the African veld in her spare time. After her stint in Africa she returned to the U.S. to teach biology first at San Jacinto College and later at Lee College nine months of each year while traveling to wild places during the summer months.
In 2005 she began filming wildlife, first for her students and later for various projects. She retired from teaching in 2008 and began filming full time. Her first production was “A Kid for the Wild” for Green Planet Films. She has provided footage for several National Geographic Wild productions and currently films some of the nature segments for CBS Sunday Morning and writes a weekly column, Nature Up Close, for their website.
She films with a RED Epic Dragon and Nikon lenses mostly in Texas, the Yellowstone Ecosystem, and South Africa.