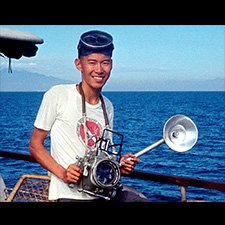 Robert Yin is a professional underwater photographer. His vocation began as a hobby in 1959, when he was living in the Philippines. Robert has been published extensively in books and magazines. His recent 35 books publications include:

Currently, Robert dives 4-5 months a year, mostly in the tropical Pacific. Years of diving experience have convinced Robert of the extreme fragility of the coral reefs, and of the urgent need to protect them. In the early 60's, the widespread belief of fishermen was that the resources of the sea were inexhaustible. Years of fishing with that mentality has proven them wrong. Today, it is clear to all that the fishing grounds have been depleted. And still, ecologically unsound fishing practices continue -- in particular, the practice of dynamite fishing on the reefs in disregard of, or in ignorance of, the fact that coral reefs are the nurseries for future fish populations. Although Robert feels it may be too late to save many of the reefs, he urges all of us to join him in promoting global marine conservation efforts.