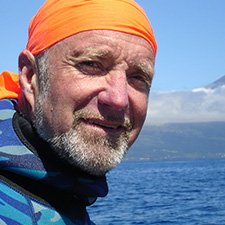 Skip Stubbs is a freelance marine videographer specializing in whales, dolphins, pinnipeds, sharks, and rays of the eastern Pacific. His credits include Tokyo Broadcasting System and NHK (Japan), Discovery Channel (US, Canada, International), BBC (UK), Welt der Wunder (Germany) and the BBC (UK).
When my good friend Phil Colla chose OceanLight as the name of his website it struck a chord with me. One of the fascinations to being underwater is the magical way ambient light is modified by the water to create shafting beams and patterns on the animals and the underwater landscape. I find the areas of greatest biodiversity and interest are the boundaries between distinct habitats, such as the shallow waters near land. These areas receive most of my attention in the water.
In addition to capturing the ocean's beauty, I also attempt to capture the unaffected behavior of animals, especially marine mammals. This requires significant time and patience, excellent dive skills, and frequent and sustained breathholding. My best success has often come after animals have become disinterested in me because of my lack of movement and reaction to their close approaches. Securing the trust of animals in such ways allows me to document genuine behavior and gives me the greatest satisfaction.
The distinguishing features of my stock video include proximity to subjects, rare animals, multiple subjects (frequently in "layers"), good light and colors, and unusual angles and composition.