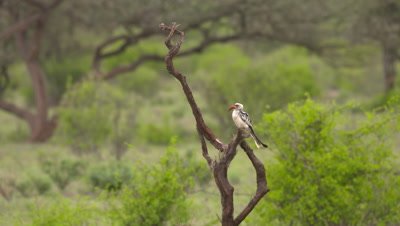 Hornbills show considerable variation in size, ranging from the black dwarf hornbill (Tockus hartlaubi), at 102 grams (3.6 oz) and 30 cm (1 ft) in length, to the great hornbill (Buceros bicornis), at up to 4 kg (8.8 lb) and 1.2 m (3 ft 11 in) in length. Males are always bigger than the females, though the extent to which this is true varies according to species. The extent of sexual dimorphism also varies with body parts. For example, the difference in body mass between males and females is 1–17%, but the variation is 8–30% for bill length and 1–21% in wing length. The most distinctive feature of the hornbills is the heavy bill, supported by powerful neck muscles as well as by the fused vertebrae. The large bill assists in fighting, preening, constructing the nest, and catching prey. A feature unique to the hornbills is the casque, a hollow structure that runs along the upper mandible. In some species it is barely perceptible and appears to serve no function beyond reinforcing the bill. In other species it is quite large, is reinforced with bone, and has openings between the hollow centre, allowing it to serve as a resonator for calls. In the helmeted hornbill the casque is not hollow but is filled with hornbill ivory and is used as a battering ram in dramatic aerial jousts. Aerial casque-butting has also been reported in the great hornbill.The plumage of hornbills is typically black, grey, white, or brown, and is frequentl...