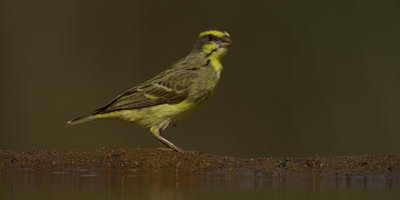 Serinus is a genus of small birds in the finch family Fringillidae found in Europe and Africa. The birds usually have some yellow in their plumage. The genus was introduced in 1816 by the German naturalist Carl Ludwig Koch. Its name is New Latin for "canary-yellow". Crithagra is a genus of small passerine birds in the finch family (Fringillidae). They live in Africa and Arabia. The species in this genus were formerly assigned to the genus Serinus but phylogenetic analysis of mitochondrial and nuclear DNA sequences found that the genus was polyphyletic.[1] It was therefore split into two monophyletic genera. Eight species including the European serin (Serinus serinus) were retained in Serinus while the other species were assigned to the resurrected genus Crithagra. Learn more about Canary