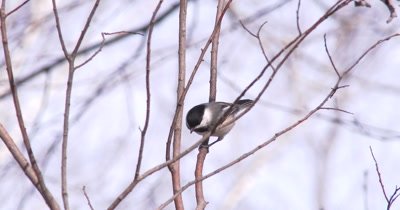 The chickadees are a group of North American birds in the tit family included in the genus Poecile. Species found in North America are referred to as chickadees, while other species in the genus are called tits. They are small-sized birds overall, usually having the crown of the head and throat patch distinctly darker than the body. They are at least 6 to 14 centimetres (2.4 to 5.5 in) in size. Their name reputedly comes from the fact that their calls make a distinctive "chick-a-dee-dee-dee", though their normal call is actually fee-bee, and the famous chick-a-dee-dee-dee is an alarm call. The number of "dees" depends on the predator. The Chickadee (specifically the black-capped chickadee Poecile atricapillus formerly Parus atricapillus) is the official bird for the state of Massachusetts. Maine has named the chickadee as the official state bird, but never specified which particular kind of chickadee.