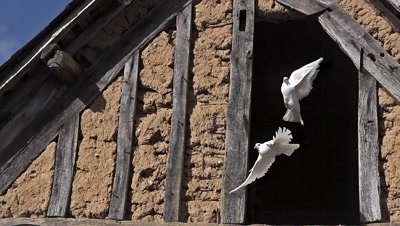 Pigeons and doves exhibit considerable variation in size, ranging in length from 15 to 75 centimetres (5.9 to 29.5 in), and in weight from 30 g (0.066 lb) to above 2,000 g (4.4 lb). The largest species is the crowned pigeon of New Guinea, which is nearly turkey-sized, at a weight of 2–4 kg (4.4–8.8 lb). The smallest is the New World ground dove of the genus Columbina, which is the same size as a house sparrow, weighing as little as 22 g (0.049 lb). The dwarf fruit dove, which may measure as little as 13 cm (5.1 in), has a marginally smaller total length than any other species from this family. One of the largest arboreal species, the Marquesan imperial pigeon, currently battles extinction. Overall, the Columbidae tend to have short legs, short bills with a fleshy cere, and small heads on large, compact bodies. Like some other birds, the Columbidae have no gall bladders. Some medieval naturalists concluded they have no bile (gall), which in the medieval theory of the four humours explained the allegedly sweet disposition of doves. In fact, however, they do have bile (as Aristotle had earlier realized), which is secreted directly into the gut. The wings are large, and have eleven primary feathers pigeons have strong wing muscles (wing muscles comprise 31–44% of their body weight) and are among the strongest fliers of all birds. In a series of experiments in 1975 by Dr. Mark B. Friedman, using d...