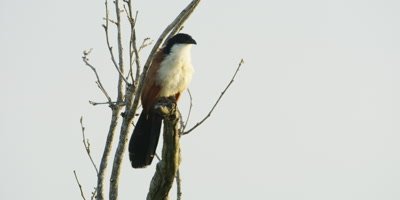 A coucal is one of about 30 species of birds in the cuckoo family. All of them belong in the subfamily Centropodinae and the genus Centropus. Unlike many Old World cuckoos, coucals are not brood parasites, though they do have their own reproductive peculiarity: all members of the genus are (to varying degrees) sex-role reversed, so that the smaller male provides most of the parental care. At least one coucal species, the black coucal, is polyandrous. Some species (Centropus phasianinus) have the male investing more in incubation and parental care. DNA evidence has indicated that they should be raised to family status, as Centropodidae. Learn more about Coucal