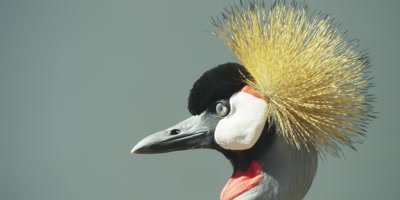 Cranes are a family, the Gruidae, of large, long-legged, and long-necked birds in the group Gruiformes. The 15 species of cranes are placed in three genera, Antigone, Balearica, and Grus. Unlike the similar-looking but unrelated herons, cranes fly with necks outstretched, not pulled back. Cranes live on all continents except Antarctica and South America. They are opportunistic feeders that change their diets according to the season and their own nutrient requirements. They eat a range of items from suitably sized small rodents, fish, amphibians, and insects to grain and berries. Cranes construct platform nests in shallow water, and typically lay two eggs at a time. Both parents help to rear the young, which remain with them until the next breeding season. Some species and populations of cranes migrate over long distances; others do not migrate at all. Cranes are solitary during the breeding season, occurring in pairs, but during the nonbreeding season, they are gregarious, forming large flocks where their numbers are sufficient. Most species of cranes have been affected by human activities and are at the least classified as threatened, if not critically endangered. The plight of the whooping cranes of North America inspired some of the first US legislation to protect endangered species. Learn more about Crane