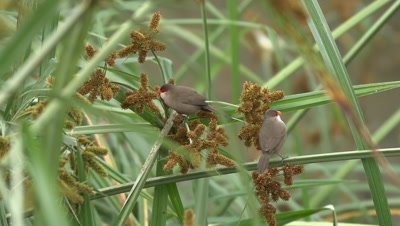 Estrildidae, or estrildid finch, is a family of small passerine birds of the Old World tropics and Australasia. They can be classified as the family Estrildidae, comprising species commonly known as munias, mannakins, firefinches, parrotfinches and waxbills, or as a subfamily within the family Passeridae, which strictly defined comprises the Old World sparrows. Despite the word "finch" being included in the common names of many of the species, they are not closely related to birds with this name in other families, such as the Fringillidae, Emberizidae or Passerellidae. They are gregarious and often colonial seed eaters with short, thick, but pointed bills. They are all similar in structure and habits, but vary widely in plumage colours and patterns. All the estrildids build large, domed nests and lay five to ten white eggs. Many species build roost nests. Some of the fire-finches and pytilias are hosts to the brood-parasitic indigobirds and whydahs, respectively.