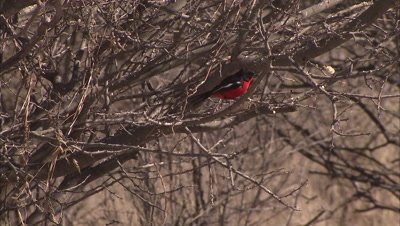 Laniarius is a genus of brightly coloured, carnivorous passerine birds commonly known as boubous or gonoleks. Not to be confused with the similar-sounding genus Lanius, they were formerly classed with the true shrikes in the family Laniidae, but they and related genera are now considered sufficiently distinctive to be separated from that group as the bush-shrike family Malaconotidae. This is an African group of species which are found in scrub or open woodland. They are similar in habits to shrikes, hunting insects and other small prey from a perch on a bush. Although similar in build to the shrikes, these tend to be either colourful species or largely black. Some species are also quite secretive.