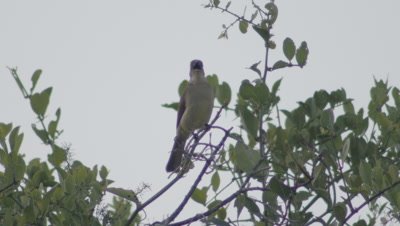 The greenbuls are a group of birds within the bulbul family Pycnonotidae, found only within Africa. They are all largely drab olive-green above, and paler below, with few distinguishing features. The "aberrant greenbuls" of the genera Bernieria and Xanthomixis are actually Malagasy warblers. To recognize this, they are also called bernieria and tetrakas rather than greenbuls. Likewise, the golden greenbul is not a typical greenbul, but apparently the representative of a distinct and ancient lineage of bulbuls, which might include the black-collared bulbul. A few species within some of the genera in this group are called brownbuls or leafloves.