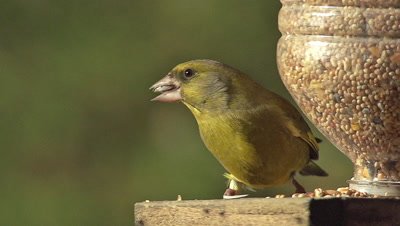 Chloris is a genus of small passerine birds, the greenfinches, in the subfamily Carduelinae within the Fringillidae. The species have a Eurasian distribution except for the European greenfinch that also occurs in North Africa. These finches all have large conical bills and yellow patches on the wing feathers. The greenfiches were formerly placed in the genus Carduelis. Molecular phylogenetic studies showed that the greenfinches form a monophyletic group that is not closely related to the species in Carduelis and instead is sister to a clade containing the desert finch (Rhodospiza obsoleta) and the Socotra golden-winged grosbeak (Rhynchostruthus socotranus). The greenfinches were therefore moved to the resurrected genus Chloris which had originally been introduced by the French naturalist Georges Cuvier in 1800 with the European greenfinch as the type species. The name is from Ancient Greek khloris, the European greenfinch, from khloros, "green".