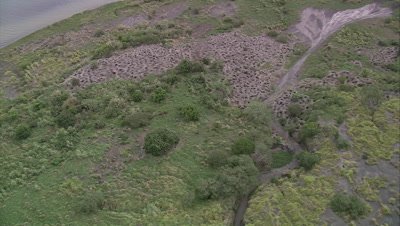 Megapodes are medium-sized to large terrestrial birds with large legs and feet with sharp claws. The largest members of the clade are the species of Alectura and Talegalla. The smallest are the Micronesian scrubfowl (Megapodius laperouse) and the Moluccan scrubfowl (Eulipoa wallacei). They have small heads, short beaks, and rounded and large wings. Their flying abilities vary within the clade. They present the hallux at the same level of the other toes just like the species of the clade Cracidae. The other Galliformes have their halluces raised above the level of the front toes.