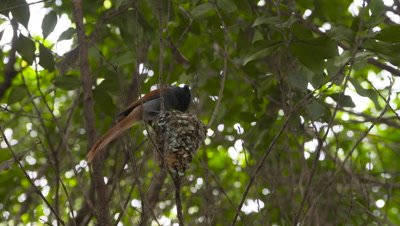 The monarchs are a diverse family of passerine birds that are generally arboreal (with the exception of the magpie-larks). They are mostly slim birds and possess broad bills. The bills of some species are quite large and the heavy-set bills of the shrikebills are used to probe dead wood and leaves. The plumage of the family ranges from sombre, such as the almost monochrome black monarch, to spectacular, as displayed by the golden monarch. The tails are generally long and spectacularly so in the paradise flycatchers in the genus Terpsiphone. Sexual dimorphism in plumage can be subtle, as in the paperbark flycatcher, where the female is identical to the male except for a slight buff on the throat striking, as in the Chuuk monarch where the male almost entirely white and the female entirely black or non-existent, as in the Tahiti monarch. In some species, for example the Malagasy paradise flycatcher, the males have two or more colour morphs.