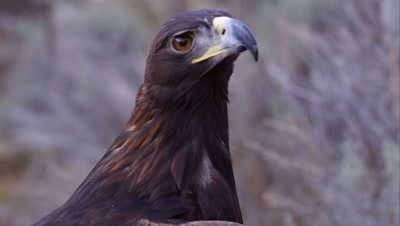 The Accipitridae, one of the four families within the order Accipitriformes (the others being Cathartidae, Pandionidae and Sagittariidae), are a family of small to large birds with strongly hooked bills and variable morphology based on diet. They feed on a range of prey items from insects to medium-sized mammals, with a number feeding on carrion and a few feeding on fruit. The Accipitridae have a cosmopolitan distribution, being found on all the world's continents (except Antarctica) and a number of oceanic island groups. Some species are migratory. Many well-known birds, such as hawks, eagles, kites, harriers and Old World vultures are included in this group. The osprey is usually placed in a separate family (Pandionidae), as is the secretary bird (Sagittariidae), and the New World vultures are also usually now regarded as a separate family or order. Karyotype data indicate the accipitrids analysed are indeed a distinct monophyletic group, but whether this group should be considered a family or one or several order(s) on their own is a question still to be resolved. Learn more about Raptor