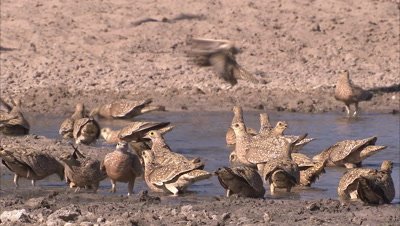 Sandgrouse is the common name for Pteroclidae, a family of sixteen species of bird, members of the order Pterocliformes. They are traditionally placed in two genera. The two central Asian species are classified as Syrrhaptes and the other fourteen species, from Africa and Asia, are placed in the genus Pterocles. They are ground dwelling birds restricted to treeless, open country, such as plains, savannahs and semi-deserts. They are distributed across northern, southern and eastern Africa, Madagascar, the Middle East and India through to central Asia. The ranges of the black-bellied sandgrouse and the pin-tailed sandgrouse extend into the Iberian Peninsula and France, and Pallas's sandgrouse occasionally breaks out in large numbers from its normal range in Asia. Learn more about Sandgrouse