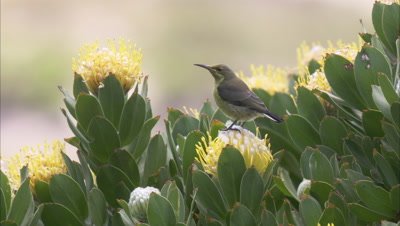 The two sugarbird species are medium-sized passerines that weigh between 26 and 46 g (0.92 and 1.62 oz) and are 23 to 44 cm (9.1–17.3 in) in length. Between 15 and 38 cm (5.9 and 15.0 in) of that length is in their massively elongated tails, the tails of the Cape sugarbird being overall longer than those of Gurney's sugarbird. In both species, the tail of the male is longer than the female, although the difference is more pronounced in the Cape sugarbird. In overall body size, the males are slightly larger and heavier than the females. Both species have long and slender bills that are slightly curved, and again the females have a slightly shorter bill, leading to differences in feeding niches. The skull and tongue morphologies of the sugarbirds are very similar to that of the honeyeaters, the result of convergent evolution. The tongue is long and protrusible, and is tubular and frilled at the end.