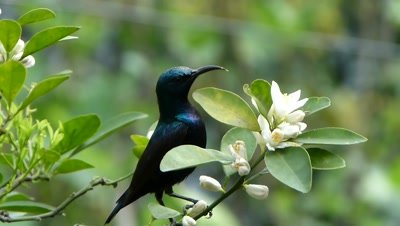 The family ranges in size from the 5-gram black-bellied sunbird to the spectacled spiderhunter, at about 45 grams. Like the hummingbirds, sunbirds are strongly sexually dimorphic, with the males usually brilliantly plumaged in iridescent colours. In addition to this the tails of many species are longer in the males, and overall the males are larger. Sunbirds have long thin down-curved bills and brush-tipped tubular tongues, both adaptations to their nectar feeding. The spiderhunters, of the genus Arachnothera, are distinct in appearance from the other members of the family. They are typically larger than the other sunbirds, with drab brown plumage that is the same for both sexes, and long, down-curved beaks. In metabolic behaviour similar to that of Andes hummingbirds, species of sunbirds that live at high altitudes or latitudes will enter torpor while roosting at night, lowering their body temperature and entering a state of low activity and responsiveness. The moulting regimes of sunbirds are complex, being different in different species. Many species have no eclipse plumage, but do have juvenile plumage. Some species do show duller plumage in the off-season. In the dry months of June−August, male copper sunbirds and variable sunbirds lose much of their metallic sheen. In some instances different populations of the same species can display variation in different molting regimes. Learn more about Sunbird