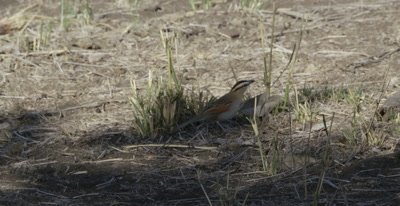 These are long-tailed birds, typically with a grey or grey-brown back, brown wings and grey and whitish underparts. The head pattern is distinctive, with a dark cap and black eyestripe separated by a white supercilium. The bill is strong and hooked. The male and female are similar in plumage in all tchagra species, but distinguishable from immature birds. These are solitary birds which tend to skulk low down or on the ground. They have distinctive whistled calls and can be readily tempted into sight by imitating the call, presumably because the tchagra is concerned that there is an intruder in its territory. These are species typically of scrub, open woodland, semi-desert and cultivation in sub-Saharan Africa. They hunt large insects from a low perch in a bush, and the larger species like black-crowned tchagra will also take vertebrate prey such as frogs and snakes.