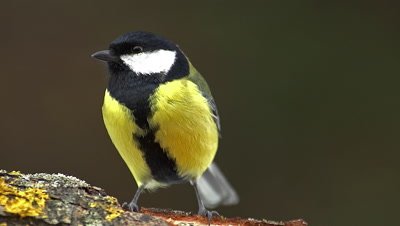 The tits, chickadees, and titmice constitute the Paridae, a large family of small passerine birds which occur mainly in the Northern Hemisphere and Africa. Most were formerly classified in the genus Parus. Members of this family are commonly referred to as "tits" throughout much of the world, but North American species are called either "chickadees" (onomatopoeic, derived from their distinctive "chick-a dee dee dee" alarm call) or "titmice". The name titmouse is recorded from the 14th century, composed of the Old English name for the bird, mase (Proto-Germanic *maison, German Meise), and tit, denoting something small. The former spelling, "titmose", was influenced by mouse in the 16th century. Emigrants to New Zealand presumably identified some of the superficially similar birds of the genus Petroica of the family Petroicidae, the Australian robins, as members of the tit family, giving them the title tomtit, although, in fact, they are not related. These birds are mainly small, stocky, woodland species with short, stout bills. Some have crests. They range in length from 10 to 22 cm (3.9 to 8.7 in). They are adaptable birds, with a mixed diet including seeds and insects. Many species live around human habitation and come readily to bird feeders for nuts or seed, and learn to take other foods. Learn more about Tit and chickadee

View All Tit and Chickadee Videos