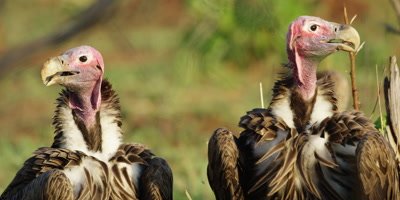 A vulture is a scavenging bird of prey. The two types of vultures are the New World vultures, including the Californian and Andean condors, and the Old World vultures, including the birds that are seen scavenging on carcasses of dead animals on African plains. Some traditional Old World vultures (including the bearded vulture) are not closely related to the others, which is why the vultures are to be subdivided into three taxa rather than two. New World vultures are found in North and South America Old World vultures are found in Europe, Africa, and Asia, meaning that between the two groups, vultures are found on every continent except Australia and Antarctica (though Trigonoceps vultures have crossed the Wallace line). A particular characteristic of many vultures is a bald head, devoid of normal feathers. Although it has been historically believed to help keep the head clean when feeding, the bare skin may play an important role in thermoregulation. Vultures have been observed to hunch their bodies and tuck in their heads in the cold, and open their wings and stretch their necks in the heat. Vultures also use urine as a way to keep themselves cool by urinating on themselves. A group of vultures is called a kettle, committee or wake. The term kettle refers to vultures in flight, while committee refers to vultures resting on the ground or in trees. Wake is reserved for a group of vultures that are feeding. The word Geier (taken from the German language) does not have... Learn more about Vulture