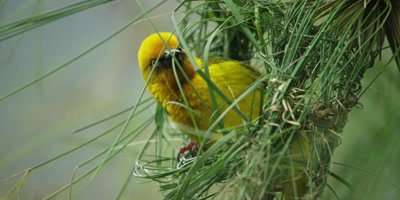 Ploceidae is a family of small passerine birds, many of which are called weavers, weaverbirds, weaver finches and bishops. These names come from the nests of intricately woven vegetation created by birds in this family. In most recent classifications, Ploceidae is a clade, which excludes some birds that have historically been placed in the family, such as some of the sparrows, but which includes the monotypic subfamily Amblyospizinae. The family is believed to have originated in the mid-Miocene. All birds of the Ploceidae are native to the Old World, most in Africa south of the Sahara, though a few live in tropical areas of Asia. A few species have been introduced outside their native range. Learn more about Weaver