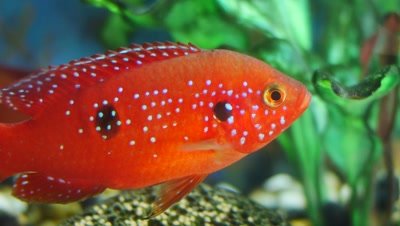 Cichlids /ˈsɪklɪdz/ are fish from the family Cichlidae in the order Cichliformes. Cichlids were traditionally classed in a suborder, Labroidei, along with the wrasses (Labridae), in the order Perciformes but molecular studies have contradicted this grouping. The closest living relatives of cichlids are probably the convict blennies and both families are classified in the 5th edition of Fishes of the World as the two families in the Cichliformes, part of the subseries Ovalentaria. This family is both large and diverse. At least 1,650 species have been scientifically described, making it one of the largest vertebrate families. New species are discovered annually, and many species remain undescribed. The actual number of species is therefore unknown, with estimates varying between 2,000 and 3,000. Many cichlids, particularly tilapia, are important food fishes, while others, such as the Cichla species, are valued game fish. The family also includes many popular freshwater aquarium fish kept by hobbyists, including the angelfish, oscars, and discus. Cichlids have the largest number of endangered species among vertebrate families, most in the haplochromine group. Cichlids are particularly well known for having evolved rapidly into a large number of closely related but morphologically diverse species within large lakes, particularly Tanganyika, Victoria, Malawi, and Edward. Their diversity in the African Great Lakes is important for the study of speciation in evolutio... Learn more about Cichlid