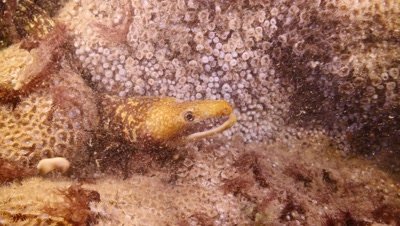 While understandably named for their disproportionately large, fang-like teeth and unapproachable visage, fangtooths are actually quite small and harmless to humans: the larger of the two species, the common fangtooth, reaches a maximum length of just 16 cm (6.3 in) the shorthorn fangtooth is less than half this size though currently known only from juvenile specimens. The head is small with a large jaw and appears haggard, riddled with mucous cavities delineated by serrated edges and covered by a thin skin. The eyes are relatively small, set high on the head the entire head is a dark brown to black and is strongly compressed laterally, deep anteriorly and progressively more slender towards the tail. The fins are small, simple, and spineless the scales are embedded in the skin and take the form of thin plates. As compensation for reduced eyes, the lateral line is well-developed and appears as an open groove along the flanks. In adults, the largest two fangs of the lower jaw are so long, the fangtooths have evolved a pair of opposing sockets on either side of the brain to accommodate the teeth when the mouth is closed. According to BBC's Blue Planet, episode "The Deep", the fangtooth has the largest teeth of any fish in the ocean, proportionate to body size, and are so large, they can never close their mouths. The juveniles are morphologically quite different - unlike the adults, they possess long spines on the head and preoperculum, larger eyes, a functio... Learn more about Fangtooth