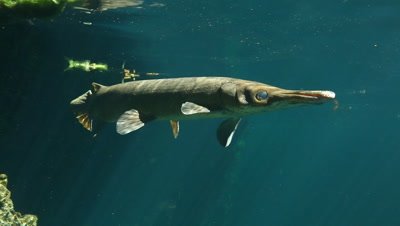 Gars (or garpike) are members of the Lepisosteiformes (or Semionotiformes), an ancient holosteian order of ray-finned fish fossils from this order are known from the Late Jurassic onwards. The family Lepisosteidae includes seven living species of fish in two genera that inhabit fresh, brackish, and occasionally marine, waters of eastern North America, Central America and the Caribbean islands. Gars have elongated bodies that are heavily armored with ganoid scales, and fronted by similarly elongated jaws filled with long, sharp teeth. All of the gars are relatively large fish, but the alligator gar (Atractosteus spatula) is the largest, as specimens have been reported to be 3 m (9.8 ft) in length however, they typically grow to 2 m (6.5 ft) and weigh over 45 kg (100 lb). Unusually, their vascularised swim bladders can function as lungs, and most gars surface periodically to take a gulp of air. Gar flesh is edible and the hard skin and scales of gars are used by humans however their eggs are highly toxic. Learn more about Gar