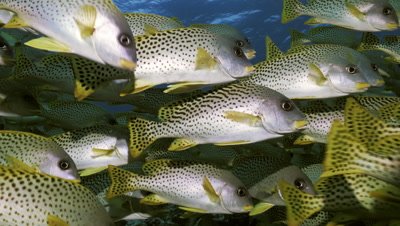 Haemulidae is a family of fishes in the order Perciformes known commonly as grunts. It is made up of the two subfamilies Haemulinae (grunters) and Plectorhynchinae (sweetlips), which in turn contain about 133 species in 19 genera. These fish are found in tropical fresh, brackish, and salt waters around the world. They are bottom-feeding predators, and named for the ability of Haemulinae to produce sound by grinding their teeth. They also engage in mutualistic relationship with cleaner gobies of genus Elacatinus, allowing them to feed on ectoparasites on their bodies. Learn more about Grunt