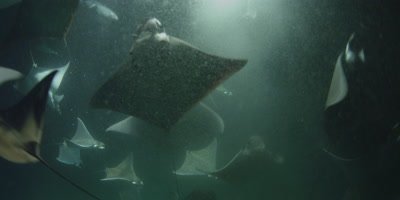 Mobula is a genus of rays in the family Mobulidae found worldwide in tropical and warm, temperate seas. Some authorities consider this to be a subfamily of the Myliobatidae (eagle rays). Their appearance is similar to that of manta rays, which are in the same family, and based on genetic and morphological evidence, the mantas belong in Mobula (they are traditionally in their own genus Manta). Species of this genus are often collectively referred to as "devil rays", "flying mobula", or simply "flying rays", due to their propensity for breaching, sometimes in a spectacular manner. Depending on the exact species, the devil rays can attain widths up to 1.1–5.2 m (3.6–17.1 ft), the largest being second only to the manta rays in size, which can reach 5.5–7.0 m (18.0–23.0 ft). Despite their size, little is known about the devil rays, much of it being from anecdotal accounts, whereas the manta rays are better known. Most species entirely lack a tail stinger. In most species having a stinger, it is encased, rendering it harmless only M. mobular has a "free" stinger.