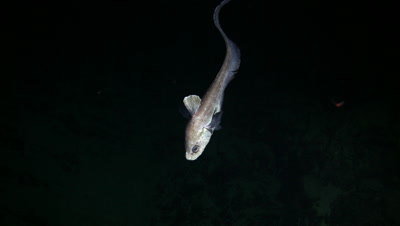 Grenadiers or rattails are generally large, brown to black gadiform marine fish of the subfamily Macrourinae, the largest subfamily of the family Macrouridae. Found at great depths from the Arctic to Antarctic, members of this subfamily are amongst the most abundant of the deep-sea fish. The macrourins form a large and diverse family with 28 extant genera recognized (well over half of the total species are contained in just three genera, Coelorinchus, Coryphaenoides, and Nezumia). They range in length from about 10 cm (3.9 in) in Hymenogadus gracilis to 1.5 m (4.9 ft) in Albatrossia pectoralis. An important commercial fishery exists for the larger species, such as the giant grenadier and Coryphaenoides rupestris. The subfamily as a whole may represent up to 15% of the deep-sea fish population. Typified by large heads with large mouths and eyes, grenadiers have slender bodies that taper greatly to very thin caudal peduncles or tails (excluding one species with no tail fin): this rat-like tail explains the common name 'rattail' and both the subfamily name and family name are derived from the Greek makros meaning "great" and oura meaning "tail". The first dorsal fin is small, high, and pointed (and may be spinous) the second dorsal fin runs along the rest of the back and merges with the tail and extensive anal fin. The scales are small. Learn more about Rattail