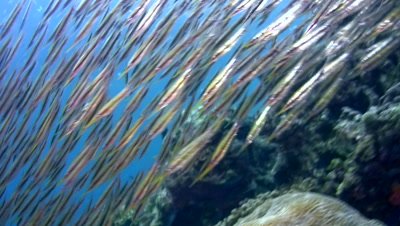 Razorfish is a common name used for three unrelated groups of fishes. Shrimpfish, also called razorfish, are five small species of marine fishes in the subfamily Centriscinae of the family Centriscidae. The species in the genera Aeoliscus and Centriscus are found in relatively shallow tropical parts of the Indo-Pacific, while the banded bellowsfish, which often is placed in the subfamily Macroramphosinae instead, is restricted to deeper southern oceans. Xyrichtys is a genus of wrasses native to the Atlantic, Indian and Pacific Oceans, where they are found in sandy-bottomed habitats. They are commonly known as razorfishes, as they are very laterally compressed with a sharp bony ridge at the front of their heads. This adaptation allows them to burrow very quickly into the sand at any sign of danger. Aeoliscus strigatus, also known as the razorfish, jointed razorfish or coral shrimpfish, is a member of the family Centriscidae of the order Syngnathiformes. This unique fish adopts a head-down tail-up position as an adaptation for hiding among sea urchin spines. The razorfish is found in coastal waters in the Indo-West Pacific. Its natural habitat includes beds of sea grass and coral reefs, where sea urchins are found. Learn more about Razor-fish