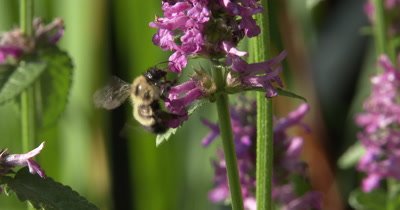 Bees are generally easy to recognize. They differ from closely related groups such as wasps by having branched or plume-like setae (hairs), combs on the forelimbs for cleaning their antennae, small anatomical differences in the limb structure and the venation of the hind wings, and in females, by having the seventh dorsal abdominal plate divided into two half-plates. Behaviourally, one of the most obvious characteristics of bees is that they collect pollen to provide provisions for their young, and have the necessary adaptations to do this. However, certain wasp species such as pollen wasps have similar behaviours, and a few species of bee scavenge from carcases to feed their offspring. The world's largest species of bee is thought to be Wallace's giant bee Megachile pluto, whose females can attain a length of 39 millimetres (1.54 in). The smallest species may be dwarf stingless bees in the tribe Meliponini whose workers are less than 2 millimetres (0.08 in) in length. A bee has a pair of large compound eyes which cover much of the surface of the head. Between and above these are three small simple eyes (ocelli) which provide information for the bee on light intensity. The antennae usually have thirteen segments in males and twelve in females and are geniculate, having an elbow joint part way along. They house large numbers of sense organs that can detect touch (mechanoreceptors), smell and taste, and small, hairlike mechanoreceptors that can detect air m... Learn more about Bee