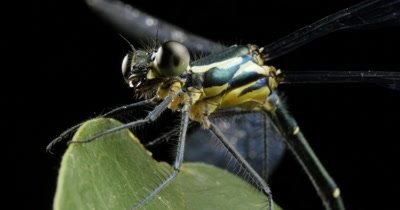 Damselflies are insects of the suborder Zygoptera in the order Odonata. They are similar to dragonflies, which constitute the other odonatan suborder, Anisoptera, but are smaller and have slimmer bodies. Most species fold the wings along the body when at rest, unlike dragonflies which hold the wings flat and away from the body. An ancient group, damselflies have existed since at least the Lower Permian, and are found on every continent except Antarctica. The general body plan of a damselfly is similar to that of a dragonfly. The compound eyes are large but are more widely separated and relatively smaller than those of a dragonfly. Above the eyes is the frons or forehead, below this the clypeus, and on the upper lip the labrum, an extensible organ used in the capture of prey. The top of the head bears three simple eyes (ocelli), which may measure light intensity, and a tiny pair of antennae that serve no olfactory function but may measure air speed. Learn more about Damselfly