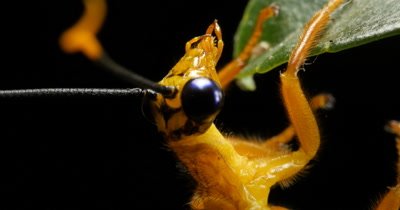 The insect order Neuroptera, or net-winged insects, includes the lacewings, mantidflies, antlions, and their relatives. The order consists of some 6,000 species. Neuroptera can be grouped together with the Megaloptera and Raphidioptera in the superfamily Neuropterida (once known as Planipennia) the latter including: alderflies, fishflies, dobsonflies, and snakeflies. Adult Neuropterans have four membranous wings, all about the same size, with many veins. They have chewing mouthparts, and undergo complete metamorphosis. Neuropterans first appeared during the Permian Period, and continued to diversify through the Mesozoic Era. During this time, several unusually large forms evolved, especially in the extinct family Kalligrammatidae, often referred to as "the butterflies of the Jurassic" due to their large, patterned wings. Learn more about Lacewing and antlion

View All Lacewing and Antlion Videos