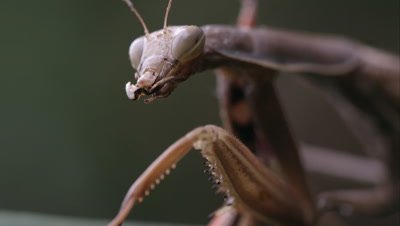 Mantidae is the largest family of the order Mantodea, commonly known as praying mantises most are tropical or subtropical. Historically, this was the only family in the order, and many references still use the term "mantid" to refer to any mantis. Technically, however, "mantid" refers only to members of the family Mantidae, and not the 14 remaining families of mantises. Some of the most recent classifications have promoted a number of the mantid subfamilies to the rank of family, e.g. Iridopterygidae, Sibyllidae, Tarachodidae, Thespidae, and Toxoderidae, while other classifications have reduced the number of subfamilies without elevating to higher rank. Many species are found in North America, the three most common being the European Mantis (Mantis religiosa), the Chinese Mantis (Tenodera sinensis), and the Carolina Mantis (Stagmomantis carolina). Of these, only the last is native to the continent – the European and Chinese species were introduced in the 20th century as predators in an attempt to control pest populations in gardens. Many mantises prey on Polybia occidentalis, a swarm founding wasp. As the wasps leave the nest to forage, the mantises will prey on them. Learn more about Mantid