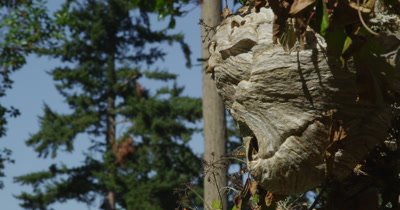 A wasp is any insect of the narrow-waisted suborder Apocrita of the order Hymenoptera which is neither a bee nor an ant; this excludes the broad-waisted sawflies (Symphyta), which look somewhat like wasps but are in a separate suborder. The wasps do not constitute a clade, a complete natural group with a single ancestor, as their common ancestor is shared by bees and ants. Many wasps, those in the clade Aculeata, can sting their insect prey. The most commonly known wasps, such as yellowjackets and hornets, are in the family Vespidae and are eusocial, living together in a nest with an egg-laying queen and non-reproducing workers. Learn more about Wasp