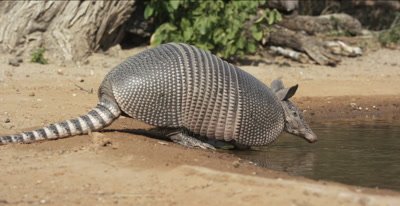 Armadillos (from Spanish "little armoured one") are New World placental mammals in the order Cingulata. The Chlamyphoridae and Dasypodidae are the only surviving families in the order, which is part of the superorder Xenarthra, along with the anteaters and sloths. Nine extinct genera and 21 extant species of armadillo have been described, some of which are distinguished by the number of bands on their armour. All species are native to the Americas, where they inhabit a variety of different environments. Armadillos are characterized by a leathery armour shell and long sharp claws for digging. They have short legs, but can move quite quickly. The average length of an armadillo is about 75 cm (30 in), including tail. The giant armadillo grows up to 150 cm (59 in) and weighs up to 54 kg (119 lb), while the pink fairy armadillo has a length of only 13–15 cm (5–6 in). When threatened by a predator, Tolypeutes species frequently roll up into a ball. Learn more about Armadillo