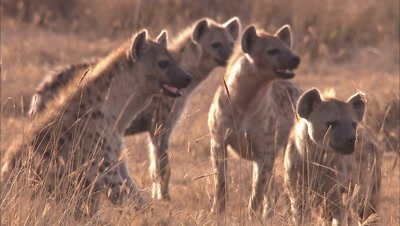 Hyenas, or hyaenas (from Ancient Greek ὕαινα, hýaina, are feliform carnivoran mammals of the family Hyaenidae /haɪˈɛnɪdiː/. With only four extant species (in three genera), it is the fifth-smallest biological family in the Carnivora and one of the smallest in the class Mammalia. Despite their low diversity, hyenas are unique and vital components of most African ecosystems. Although phylogenetically closer to felines and viverrids, as part of suborder Feliformia, hyenas are behaviourally and morphologically similar to canids in several elements due to convergent evolution; both hyenas and canines are non-arboreal, cursorial hunters that catch prey with their teeth rather than claws. Learn more about Hyena