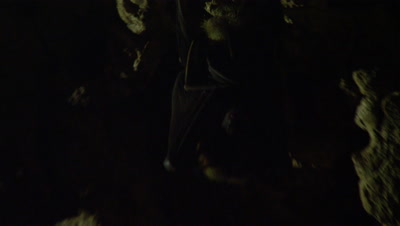 Megabats are so called for their larger weight and size, weighing up to one kilogram (two pounds) with wingspans reaching up to 1.7 m (5.6 ft). Despite the fact that body size was a defining characteristic that Dobson used to separate microbats and megabats, not all species of megabat are larger than microbats. Megabats range in size from 14.2 g (0.50 oz) in the spotted-winged fruit bat (Balionycteris maculata) to 1,075 g (37.9 oz) in the giant golden-crowned flying fox (Acerodon jubatus). The flying foxes of Pteropus and Acerodon are often taken as exemplars of the whole family in terms of body size. In reality, these genera are outliers, creating a misconception of the true size of most megabat species. One review showed that 28% of megabat species weigh less than 50 g (1.8 oz). Megabats can be distinguished from microbats in appearance by their dog-like faces, presence of claws on the second digit (see Megabat#Postcrania), and by their simple ears. Megabats of the genus Nyctimene, however, appear less dog-like, with shorter faces and tubular nostrils. The simple appearance of the ear is due in part to the lack of tragi (cartilage flaps projecting in front of the ear canal), which are found in many microbat species. While the majority of megabat species (63%) have fur that is a uniform color, other pelage patterns are seen in this family, including countershading in 4% of species, a neck band or mantle in 5% of species, st...