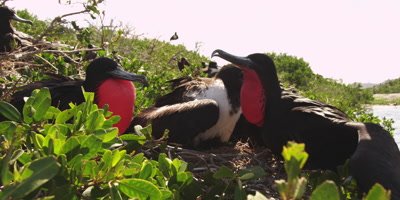 Frigatebirds are large slender mostly black-plumaged seabirds, with the five species similar in appearance to each other. The largest species is the magnificent frigatebird, which reaches 114 cm (45 in) in length, with three of the remaining four almost as large. The lesser frigatebird is substantially smaller, at around 71 cm (28 in) long. Frigatebirds exhibit marked sexual dimorphism females are larger and up to 25 percent heavier than males, and generally have white markings on their underparts. Frigatebirds have short necks and long, slender hooked bills. Their long narrow wings (male wingspan can reach 2.3 metres (7.5 ft)) taper to points. Their wings have eleven primary flight feathers, with the tenth the longest and eleventh a vestigial feather only, and 23 secondaries. Their tails are deeply forked, though this is not apparent unless the tail is fanned. The tail and wings give them a distinctive 'W' silhouette in flight. The legs and face are fully feathered. The totipalmate feet are short and weak, the webbing is reduced and part of each toe is free. The bones of frigatebirds are markedly pneumatic (filled with air), making them very light and contribute only 5% to total body weight. The pectoral girdle (shoulder joint) is strong as its bones are fused. The pectoral muscles are well-developed, and weigh as much as the frigatebird's feathers—around half the body weight is made up equally of these muscles and feathers. The males ha...