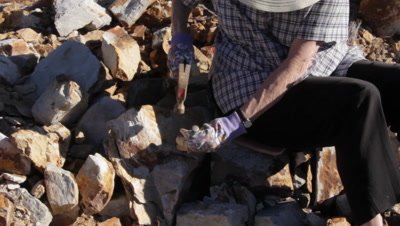 Modern brachiopods range from 1 to 100 millimetres (0.039 to 3.937 in) long, and most species are about 10 to 30 millimetres (0.39 to 1.18 in). The largest brachiopods known – Gigantoproductus and Titanaria, reaching 30 to 38 centimetres (12 to 15 in) in width – occurred in the upper part of the Lower Carboniferous. Each has two valves (shell sections) which cover the dorsal and ventral surface of the animal, unlike bivalve molluscs whose shells cover the lateral surfaces. The valves are termed brachial and pedicle. The brachial valve bears on its inner surface the brachia ("arms") from which the phylum gets its name, and which support the lophophore, used for feeding and respiration. The pedicle valve has on its inner surface the attachment to the stalk-like pedicle by which most brachiopods attach themselves to the substrate. (R. C. Moore, 1952) The brachial and pedicle valves are often called the dorsal ("upper" / pedicle) and ventral ("lower" / brachial), but some paleontologists regard the terms "dorsal" and "ventral" as irrelevant since they believe that the "ventral" valve was formed by a folding of the upper surface under the body. The pedicle valve is typically larger than the brachial. In most articulate brachiopod species, both valves are convex, the surfaces often bearing growth lines and/or other ornamentation. However, inarticulate lingulids, which burrow into the seabed, have valves that are smoother, flatter and of similar size... Learn more about Lamp shell