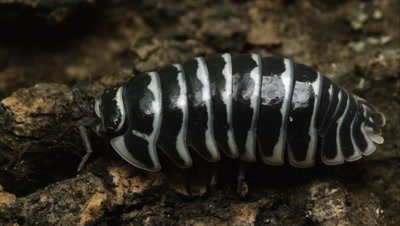 Classified within the arthropods, isopods have a chitinous exoskeleton and jointed limbs. Isopods are typically flattened dorsoventrally (broader than they are deep), although many species deviate from this rule, particularly parasitic forms, and those living in the deep sea or in ground water habitats. Their colour may vary, from grey to white, or in some cases red, green, or brown. Isopods vary in size, ranging from some Microcerberidae species of just 0.3 mm to the deep sea Bathynomus spp. of nearly 50 cm (20 in). Isopods lack an obvious carapace (shell), which is reduced to a "cephalic shield" covering only the head. This means that the gill-like structures, which in other related groups are protected by the carapace, are instead found on specialised limbs on the abdomen. The dorsal (upper) surface of the animal is covered by a series of overlapping, articulated plates which give protection while also providing flexibility. The isopod body plan consists of a head (cephalon), a thorax (pereon) with eight segments (pereonites), and an abdomen (pleon) with six segments (pleonites), some of which may be fused. The head is fused with the first segment of the thorax to form the cephalon. There are two pairs of unbranched antennae, the first pair being vestigial in land-dwelling species. The eyes are compound and unstalked and the mouthparts include a pair of maxillipeds and a pair of mandibles (jaws) with palps (segmented appendages with sensory func... Learn more about Pillbug