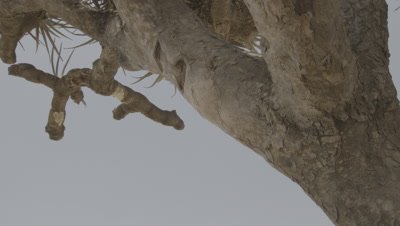 Frankincense is tapped from the scraggly but hardy trees by striping (slashing the bark) and letting the exuded resin bleed out and harden. The hardened streaks of resin are called tears. Several species and varieties of frankincense trees each produce a slightly different type of resin. Differences in soil and climate create even more diversity of the resin, even within the same species. Boswellia sacra trees are considered unusual for their ability to grow in environments so unforgiving that they sometimes grow out of solid rock. The initial means of attachment to the rock is unknown, but is accomplished by a bulbous disk-like swelling of the trunk. This growth prevents violent storms from detaching the tree. This feature is slight or absent in trees that grow in rocky soil or gravel. The trees start producing resin at about eight to 10 years old. Tapping is done two to three times a year with the final taps producing the best tears due to their higher aromatic terpene, sesquiterpene and diterpene content. Generally speaking, the more opaque resins are the best quality. Fine resin is produced in Somalia, from which the Roman Catholic Church purchases most of its stock. Recent studies indicate that frankincense tree populations are declining, partly due to over-exploitation. Heavily tapped trees produce seeds that germinate at only 16% while seeds of trees that had not been tapped germinate at more than 80%. In addition, burning, grazing, and attacks by the longhor...