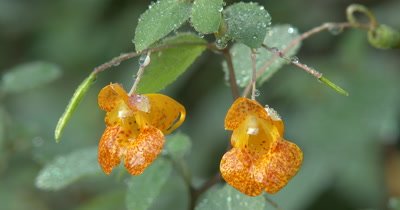 Impatiens /ɪmˈpeɪʃəns/ is a genus of more than 1,000 species of flowering plants, widely distributed throughout the Northern Hemisphere and the tropics. Together with the genus Hydrocera (1 species), Impatiens make up the family Balsaminaceae. Common names in North America include impatiens, jewelweed, touch-me-not, snapweed and patience. As a rule-of-thumb, "jewelweed" is used exclusively for Nearctic species, and balsam is usually applied to tropical species. In the British Isles by far the most common names are impatiens and busy lizzie, especially for the many varieties, hybrids and cultivars involving Impatiens walleriana. “Busy lizzie” is also found in the American literature. The invasive alien Impatiens glandulifera is commonly called Policeman's helmet in the UK. Learn more about Impatiens